After two decades, the hidden victims of the Kosovo war are finally recognised

After two decades, the hidden victims of the Kosovo war are finally recognised 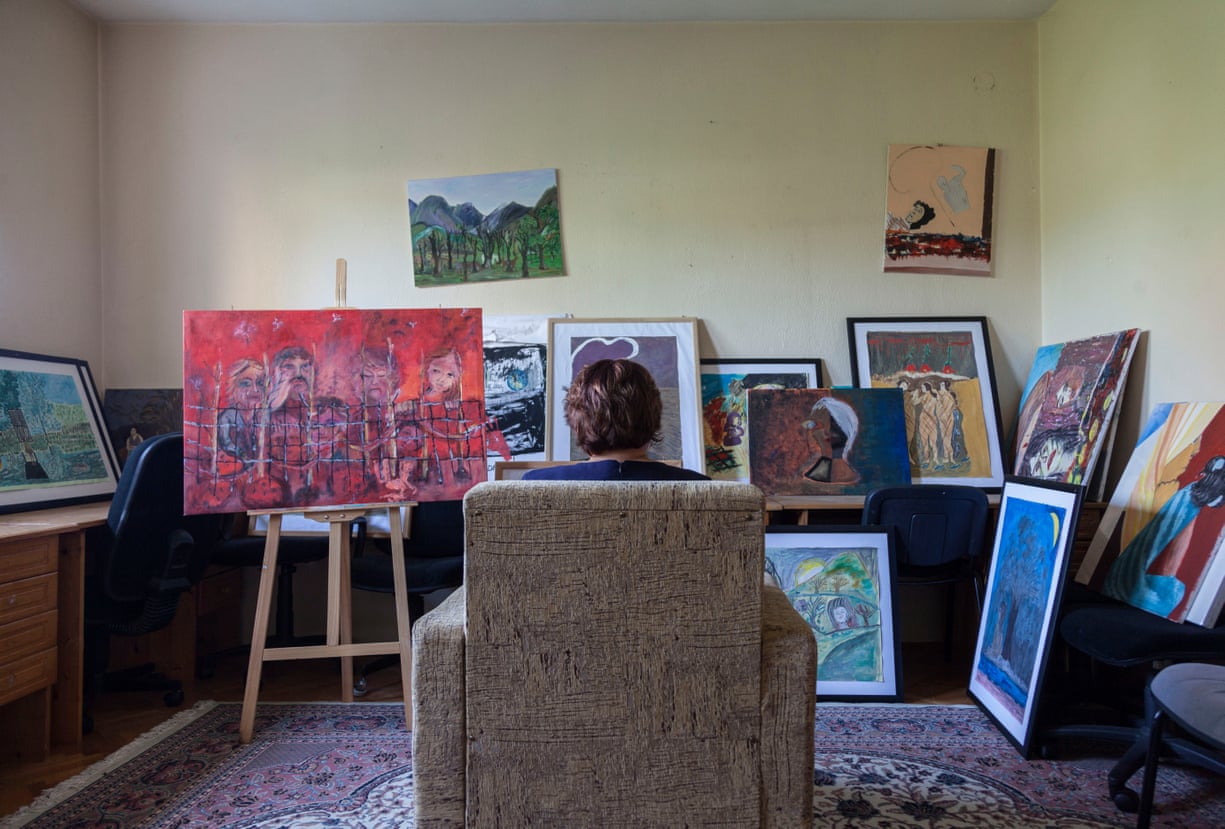 Women who survived sexual violence in the Kosovo conflict have belatedly become eligible for a war pension.

Five tombs lie side by side, marble headstones etched with the images of men whose deaths attest to one of the largest massacres by Serbian forcesduring the Kosovo war. A larger memorial in the quiet mountain village of Beleg, Gjakova, bears the names of a further 46, whose bodies were never found.

Kosovo’s landscape is dotted with tributes to freedom fighters, dead and missing; to heroes and martyrs of the ethnic Albanian uprising against the Yugoslav regime that was led by Serbian warlord Slobodan Milosevic. But nothing marks what Human Rights Watch have called the “weapons” and “instruments of systematic ethnic cleansing” of that war – the use of rape and sexual violence.

The survivors of such crimes – carried out in the patriarchal, honour culture of this Balkan state – have remained unrecognised for two decades.

Drita, 47, a Kosovo Albanian, has four family members named on the Beleg memorial who remain missing, presumed dead. Across the road is the building where, for three days and three nights before the killings, she and other women were held captive by Serb paramilitaries.

“I will never forget it,” said the mother of three. “One of the soldiers said: ‘Which one of the children do you want me to kill, as a sacrifice for Bayram [a Muslim festival]’. The kids started screaming. That was the worst thing.”

They took her upstairs. She was repeatedly raped and beaten so badly her skull fractured. Her right wrist still carries a scar, where they stubbed a cigarette out on her skin. Weeks later, on reaching the safety of Albania, she discovered she was pregnant by one of her rapists and had an abortion.

For years, Drita bore the trauma alone, telling no one but her husband, who never spoke of it. She and thousands of others, many of whom suffered life-changing injury, became the war’s hidden victims.

Now Kosovo has begun recognising them as such. In February, all survivors became eligible for a war pension in belated recognition of the harm they suffered.

By July, more than 600 survivors, including Drita, had applied for the pension. So far, 115 survivors have had their status as war victims verified and approved and 84 are receiving pensions of 230 euros a month – about 90% of the average salary for women – from the ministry of labour and social welfare.

The stigma surrounding sexual violence meant that support groups, who have been helping survivors since the war, had to approach women in secret, on the pretext of offering health and other services. In public, they lobbied government to recognise the survivors; in private, they quietly encouraged more to come forward.

Now, they report both a rise in the number of clients and a willingness to talk. The state’s recognition of their ordeal, activists say, is the country finally telling them: “It is not your fault.”

Veprore Shehu, of Medica Kosova in Gjakova, said: “Women are coming forward every single day. Women who never approached our organisation. We even have a husband and wife coming to see us.”

It is an indicator, they say, of the importance of public recognition in the fight against stigma and shame. Four groups – Kosova Rehabilitation Centre for Torture Victims (KRCT), Medica Kosova, Centre for Promotion of Women’s Rights (CPWR) and Medica Gjakova – are now supporting 1,200 survivors. Most of them are women, although some are men. It is a small number, they say – a fraction of the real figure – but they are hopeful more will follow.

Some sources have claimed up to 20,000 women and some men, suffered sexual violence during the war. Rapes of Serbian, Albanian and Roma women, some by members of the Kosovo Liberation Army, were alsodocumented after the conflict

One of the biggest stumbling blocks against survivors coming forward, particularly in rural areas, is the fear of being shunned by families and communities. Many husbands left their wives on learning of the crimes. Applications for war pensions are confidential, but people gossip.

Of the six women the Guardian spoke to who claimed compensation, only three had the support of male relatives. HH, 57, from near Klina, whose 13- and 15-year old daughters were also raped in the war, said her husband allowed her to claim, but her eldest daughter’s husband refused to let her. Another, Hana, 63, recalled how her son had threatened to kill himself if she applied for the pension.

Emboldened by the state’s recognition of their suffering, however, some are finding ways of applying in secret.

The CPWR in Drenas, Drenica, one of the most deprived areas of the country, offers a course in crafts and tailoring. It gives survivors a small amount of economic independence – and the opportunity to explain away any increase in income.

Kadire Tahiraj, the centre’s founder and director, said: “The women of Drenica suffered very badly. Their husbands and fathers were commanders in the Kosovo Liberation Army and they were affronted by these crimes. It was difficult to open the door, to get people to talk.”

Several clients, whose husbands left them after the war, had killed themselves, Tahiraj said. “Such crimes kill the soul,” she said.

Yet now attitudes are changing. She is seeing more women accompanied by their husbands than ever before.

Arta was only 13 when she was snatched from her grandfather’s arms by Serbian paramilitaries, before being raped and tortured. After finding her, bleeding and barely conscious, her father told her: “I would rather see you dead than the state you were in.”

Later, when Arta sought help for trauma, her father forbade her, telling her mother: “If she does, she will not be my daughter any more”.

Now 34, Arta, from Klina, suffers from anxiety, headaches and internal problems caused by the attack. “At 14, I felt like my life was over,” she said.

“I used to think it was just me it happened to. Nobody talked about it.”

Her life was transformed three years ago when she summoned the courage to seek help.

“I wish I had come earlier,” said Arta, now a mother of three, as she sat in the Pristina office of KRCT. “I never had the strength to enter the office. It helped me a lot and it changed me. I am calmer and I have better relationships with everyone.”

Asked what the war pension meant to her, she said: “It is good to have my own money, especially when it comes to paying for medicine. The pension is positive. Now, people are talking about us and people are supporting us. I feel like I’m not alone.”

The process remains in its infancy and is not without imperfections. It has a high failure rate: 82 out of almost 600 applicants have had their applications rejected by the commission set up to verify them, including some treated by psychologists. Medica Gjakova is making formal complaints on behalf of several clients who were rejected, but whom they believe are genuine.

Critics have also expressed concern about documentation, over a 20-year old crime. The commission requests – but does not require – supporting documents, such as psychological and medical reports, photographs of injuries and testimony supplies to investigative bodies. Applications are only open for five years and the time period covering the war, between 27 February 1998 and 20 June 1999, excludes survivors of the KLA’s revenge attacks on Kosovo Serbs and other minority women.

Minire Begaj Balaj, the commission’s chair, said the narratives themselves are the most crucial part but added that, where applicants mention medical care or giving testimony to investigators, they should include documentation. Many of the cases refused so far have had inconsistent narratives or medical reports that do not relate to wartime events, she said.

Asked what she has learned from the applications so far, Begaj Balaj pauses.

“They didn’t even spare the minors,” she said. “Even in front of their families. Most of them have health consequences.

“Documenting these cases is important to the survivors and to the state.”

Many survivors, including Drita and others we spoke to, gave testimony against the perpetrators to Eulex, the EU’s mission in Kosovo, but heard nothing. Last year, a damning report by Amnesty International found only a handful of those responsible have been prosecuted. The report condemned “the lack of clear political commitment” to prosecute such crimes.

Activists hopes the pension will empower survivors and engender renewed trust in institutions. KRCT is pushing for a new law, currently being discussed in parliament, that would judge the perpetrators in their absence.

Dr Linda Gusia, who teaches gender studies at the University of Pristina, said that while Kosovo has taken too long to recognise survivors, it must look forward.

“It’s important now that the silence is broken, to focus on what we do with it,” she said. “A lot of women I’ve interviewed knew the perpetrators, the commanders. And they want to see some kind of justice.”

Names of survivors have been changed to retain anonymity./theguardian.com